I am very lucky and have a wonderful baby girl who is usually a champion sleeper. Putting her down for the night is a relatively elaborate ritual that includes a hearty dinner, some light playing, a warm bath and several books. We nurse then, and I lay her down in the crib. About half the time, that's the end of the story. Sometimes there are complaints. Now that she's realized she can stand up in the crib (and chew on the top rail), I sometimes have to go lay her down a time or two. After four or five times of laying her down unsuccessfully, I often let her play a little longer until I catch a yawn or eye-rub, and then we nurse again and she's almost always asleep immediately.

Not so last night.

I'm not sure if she was overtired, or had some other complaint (she was drooling like mad, but teething gel didn't seem to make a difference), but we were up for HOURS and HOURS with wailing and wailing. Towards the end, even holding her didn't calm her (it almost always does), and we ended up pacing around in the dark downstairs while she waffled between sniffles and sobs, both of which were a big improvement on the shrieking. She's a big, heavy girl to be hauling around for that long, and it's so hard listening to her suffer.

So, I was unexpectedly awake for the start of our Bonus Anniversary Sketch Fest Event! http://www.ellenmilliongraphics.com/sketchfest/sketchfestprompters.php

We're doing a 24 hour jam, midnight to midnight, to celebrate 3 years of Sketch Fest. That will be most of my day, I think, though I also need to print taxes and do laundry.

This weekend was a four-day weekend, due to Jake taking Friday off and Seward's Day being on Monday. (The purchase of Alaska from the Russians is known as Seward's Folly.) We accomplished a handful of minor tasks, I went tabletop gaming on Sunday (and did some artwork), I wrote a poem for Muse Fusion, and went for long walks with Norway each day. I could probably make that sound more interesting than it is, but oof... tired. Going to try to sketch now. And then maybe nap.

Lack of sleep seems compatible with creativity... This time! 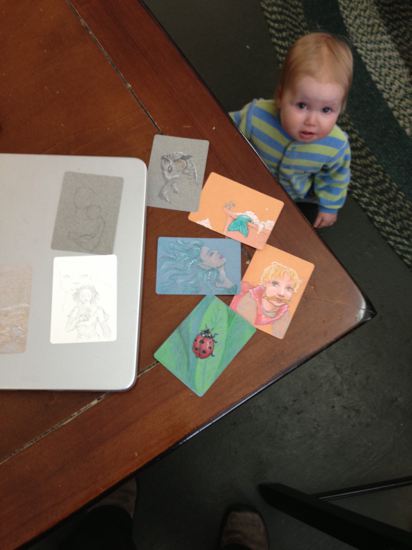 I like it less that my server flipped out partway through the Sketch Fest, so I extended it another 12 hours, because it was terrifically disruptive. Yes! We're going until NOON tomorrow!

I may inflict more on you tomorrow, but the baby is down and I never got a nap today... too busy arting! (And chasing a baby pretending to eat her head to make her giggle...) You can see all of them, plus four finished pieces from the last Fest: http://www.ellenmilliongraphics.com/sketchfest/sketchfestartist.php?id=9
Collapse